The following Cross Stitch Patterns are included in this collection:

To see the individual chart information, please check out the details on Large Charts-->Artist-->Potter or you can search by title.

Peter Rabbit, along with Benjamin Bunny, was named after a pet rabbit Beatrix Potter had as a child. The first Peter Rabbit story, The Tale of Peter Rabbit, was originally created in 1893 as a letter to the young son of Potter's former governess. The boy was ill, and Potter wrote him a story to help him pass the time and to cheer him up. The letter included sketches illustrating the narrative. It wasn't until June 1902 that the story was published by Frederick Warne & Co, but by the end of the year, 28,000 copies were in print. Over the years, The Tale of Peter Rabbit has sold more than 40 million copies worldwide and as of 2008, the Peter Rabbit series has sold more than 151 million copies in 35 languages (www.wikipedia.com) 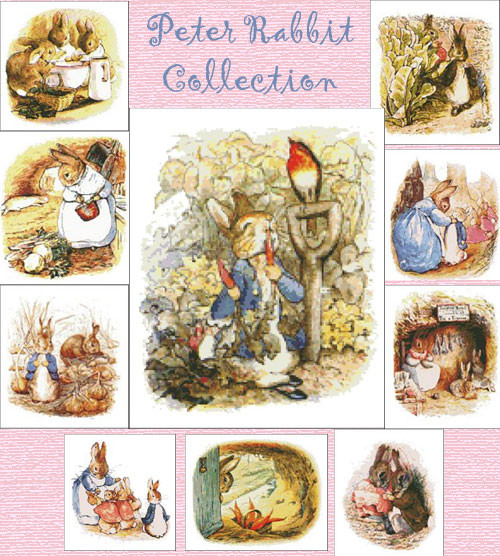