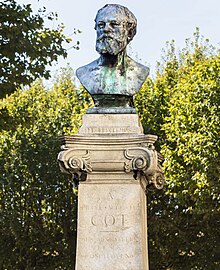 He created several works of lasting popularity, including Le Printemps, featuring two young lovers sitting upon a swing, and The Storm. Both these paintings are on display at the Metropolitan Museum of Art in New York City.

Cot also was renowned for his portraits, which made up the majority of his work. The more enduring figurative work, such as The Storm, is comparatively rare. Shortly after his death at the age of forty-six (2 August 1883), a subscription was undertaken for a commemorative monument to the artist, which was erected at Bédarieux in 1892. (Wikipedia.org)