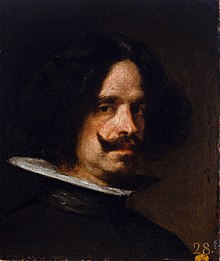 Diego Rodríguez de Silva y Velázquez (baptized June 6, 1599 – August 6, 1660) was a Spanish painter, the leading artist in the court of King Philip IV, and one of the most important painters of the Spanish Golden Age. He was an individualistic artist of the contemporary Baroque period. He began to paint in a precise tenebrist style, later developing a freer manner characterized by bold brushwork.

In addition to numerous renditions of scenes of historical and cultural significance, he painted scores of portraits of the Spanish royal family and commoners, culminating in his masterpiece Las Meninas (1656). (Wikipedia.org)